Driving along at the South China Sea coast (Miri – Bintulu Coastal Highway) will lead you to the district called Bekenu where are populated by the Kedayan’s people of Sarawak. Kedayan’s are one of the 26th subs ethnic in Miri that making the total of 37,000 populations over Sarawak. Like other ethnic in Sarawak, Kedayan’s people have their own unique traditional ceremony that shared with other communities in this region. “Makan Tahun” held annually by the Kedayan’s in northern parts of Sarawak is not only represents the unique traditions inherited but it also as a platform for their brotherly bonding. 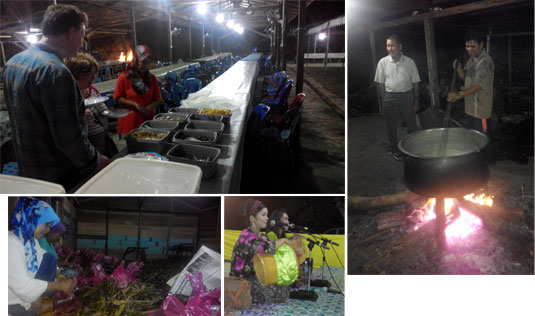 “Makan Tahun” is a thanksgiving festival held to indicate happiness and appreciation for a successful rice harvest and it’s also a symbolic of the unity of the Kedayan’s people, family and relatives alike. Thus, families, relative and friends from far and near get together during these celebrations. The Kedayan’s has the belief that if there is disunity among them, a curse from the ancestors will fall upon the living. Thus, they still have an active social obligation to these ancestors. Without this, they will lose the common cause of mutual respect among themselves. Now “Makan Tahun” is alike “Tahlil” or “Doa Tolak Bala” (Muslim prayer). Such cooperative activity is expressed when all assemble because of their social and familial ties, for the continuity of culture and safe keeping of tradition, the bond of union between the dead and living thus maintained”.  Even though rice planting is no longer the main activity among the Kedayan’s in Sarawak now, the “Makan Tahun” is still practiced and celebrate between the month of May and July every year. The origin, history and the processes the ritual “Makan Tahun” are still not fully understood by many. The unique about this ceremony is every villagers has their own duties and responsibilities to take care and  all the task given by the “Penghulu” or “Ketua Kampung” are done and normally these job will be involve all the entire villagers. Other unique things you can discover about this celebration are every inch of the locals will took some of their own foods from their house such as local rice, coconuts, coconuts shoots, or sugar and salt that will be given as a part as to make the sure all the food are enough for everybody. These practices are usually done by the older in the past, to helping and make sure all the ingredients are enough but now days these practices no longer practice anymore by the the younger generations.

Normally the first day the Kedayan’s people will do it on Friday where the first group of man and women will do the “Kelupis” and “Ngelupis” (rice that wrapping in the “nyirik” leaves) and steam it using the giant steal pot that cook using the fire wood. The man will setup a camp, a cultural place and get ready the fire wood as well as helping the women task. The activities on the second days are normally cooking and cultural entertainment. The second group of another man and women will be packaging the ”Kelupis” and other local cakes such as wajid and panyaram to be given as a gifts  to all visitors as well as villagers. At the night time, another group of man will cook all the foods using the firewood. The women only prepared all the spices and the ingredients. “Bermukun” or” Gendang Sarawak” will entertain the villagers and also the visitor that normally starts at 2100hrs. “Bermukun” or ” Gendang Sarawak” is a unique traditional entertainment of Sarawakian’s  where combines pair or group of dancer by the men in the tandem to dance follows the drum beat called “Nopeng”. Drum beaters are done by two or three women’s while exchanging poetry or “pantun” between the dancers and the drum beaters. Special place were prepared to be the dance floor and a spot for the drum beaters to sit. This cultural performer will ended until the wee hour of the morning. This traditional culture only can be practice in the big celebration and wedding ceremony.

The third days will be the peak celebrations for this ceremony. The elders pray for a successful celebration.  All rituals are followed closely especially in the preparations of making the kalupis, wajid and panyaram (also known as kelupis, wajik and penyaram among the Sarawak Malay community) so that each will turn out well for the occasion. The rituals of cooking the rice and other dishes for the guests are also attended to carefully. If the rituals are not observed, it is believed that many unwanted things could happen such as the rice in the pot will not cook properly or the dishes will turn bad or stale. It is also reported that reminders are passed down from one generation to the next about not mixing the religious element i.e. the “Tahlil” with entertainment. In addition, there is reminder about ensuring no wastage of food during the occasion. At 0900hrs the “Penghulu” or “Ketua Kampung” (headman) will start the ceremony with “Doa” and “Tahlil” (muslim prayer), after that prayer finish “Penghulu” will welcome all the villagers and the visitors to having meals together. The event will be finish by noon time and after that all the villagers will work together to clean up the area.

The Kedayan’s are now very much influenced by changes such as heterogeneous marriages, education and communication. Due to this, the “Makan Tahun” is celebrated in variations from one village to another. Still, the kalupis, wajid and panyaram remain vital to the celebration of the “Makan Tahun” tradition and culture and not forgetting the “Tahlil”. The communal spirit observed to be still very strong among this group. They still hold strong to the belief that they must remain united and have social obligation to their ancestors. Without this they will lose the common cause of mutual respect among themselves. Time and provision are among the challenges in organising the “Makan Tahun”. Yet, among the Kedayan’s in Bekenu and Bintulu, the sense of responsibility to their ancestors and their “adat” surpass those obstacles. It is hoped that the “Kedayan’s Makan Tahun” continues to carry on the tradition and the culture of the community in the future.
Posted by Minda Travel at 2:56 AM